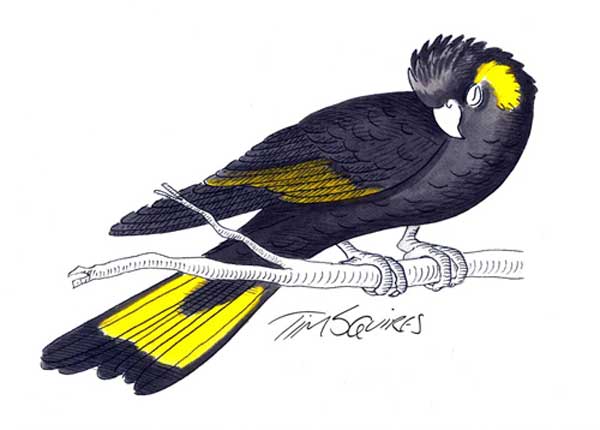 The excited chatter of schoolchildren could be heard from along the lane, drowning out the call of the scarlet robin and the crescent honeyeater. Two dozen pupils from Margate Primary School were on their way for a lesson on  birds and the wider world of nature.

It was a crisp, autumnal day, the sun burning off the last of the dew from paddock and hedgerow; the sort of day you can’t invent, a sparkling, magical day that would hopefully  linger in the minds of a future generation forever.

We often hear talk, in the context of nature conservation, that we must pass on an  unspoilt environment with the plants and creatures that inhabit it for our children and grandchildren and this was an exercise  in arming those same kids with the tools, and the appreciation, to guard this precious inheritance.

The children in Grade 4/5 at the school had been invited to an extensive native garden built and tended by Betty Hansson on the outskirts of town where suburbia becomes countryside.

She had invited me along to complement her talk on plants with one about birds, and I eagerly accepted. My motive, however, was not entirely altruistic. From past experience I know that Betty bakes wonderful cakes and the invitation came with a promise of more than one slice, and home-made biscuits, after the children had left.

It proved as magical a morning for me as it did for the children, taking me back to a time when I learned of the wonder of birds, and frogs’ spawn for that matter, during what was termed “nature study” during my primary school days in the English county of Surrey more than half a century ago.

Then, and I assume it still applies in Britain,  natural history classes were an essential part of the primary school curriculum,  along with the three Rs, of reading, writing and ’rithmetic, history and geography. I was surprised to learn when I came toAustraliathat the study of nature did not play the some essential role in the Australian curriculum, but I have now learned the topic of “sustainability” is being introduced to achieve the same purpose, linked to broader science subjects.

The term “sustainability” seemed a long way, however, from the smell of new-mown grass, freshly-spread eucalypt mulch and the mewing of yellow-tailed black cockatoos from a distant, tree-clad hill.

The children told me that they were particularly interested in spotted pardalotes because they used burrows, a focus of recent study prompted by their move into two new classrooms below the level of the other classes at their school. The classes had in fact been dubbed platypus and wombat burrow and the children were delighted to be led by Mrs Hansson to an actual platypus burrow in a stream running through her garden that feeds a lake.

Back in the garden, the children’s teacher, Anne Briggs, handed out coloured pamphlets on tree and plant identification so her pupils could not only locate such iconic Tasmanian species as huon, pencil and oyster bay  pine, but draw them.

There’s no substitute for a hands-on approach to the environment, as the enthusiasm and excitement of Grade 4/5 demonstrated, and I was reminded of the words of gardening guru Peter Cundall in one of his columns for the Sunday Tasmanian. He said he always encouraged children to get into the garden, because youngsters who planted  seeds and encouraged plants to grow would never vandalise trees.

After an hour or so it was time for the children to put way their notebooks and march back to school a kilometre distant. They had missed their mid-morning snack during  recess and no doubt were hungry.

My own  “recess”,  of freshly-baked fruit cake, was closer to hand.

Silent and brooding, the Shy Mountain does not have to speak her name. We know she’s there, watching … END_OF_DOCUMENT_TOKEN_TO_BE_REPLACED

Although written more than 30 years ago, The Falconer of Central Park has remained popular ever … END_OF_DOCUMENT_TOKEN_TO_BE_REPLACED

Tasmania might be known internationally as the home of the Hollywood cartoon character, Taz, based … END_OF_DOCUMENT_TOKEN_TO_BE_REPLACED