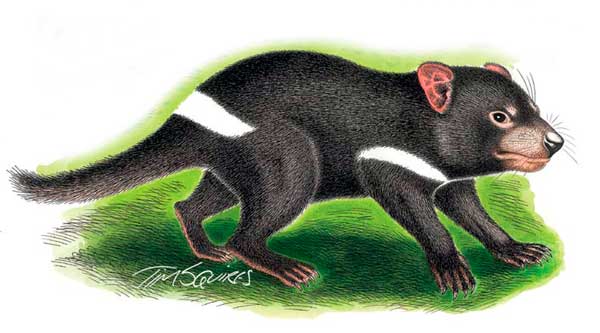 The hollows in the stony beach – from which hunting Aborigines once launched ambushes on seals – were not too difficult to find. I had been told what to look out for on a track along the Tarkine coast and I set out at dawn one morning to scour the beach for them.

A flock of  white-fronted chats were calling as they searched for invertebrates among kelp and chestnut teals were riding the waves in a rocky inlet as I cast my gaze over a beach of grey boulders the size of a man’s fist, seeking out the shape of the depressions.

Immediately I found the depressions at the high-tide mark. They followed the contours of the rocks as they sloped towards the roaring Southern Ocean, and were deep enough to hide several hunters lying in wait for the seals to come ashore.

When the depressions were hollowed out is anyone’s guess, but certainly not in the past 200 years after Aborigines were uprooted in the area by white settlers. The depressions could go back hundreds of years, or even thousands if the hollows had been maintained against rising and falling tides over the millennia.

For a moment I was lost in a lost world, but the 21st century soon intruded. Studying the hollows more closely, I noticed the tracks of a four-wheel drive vehicle not more than a metre away. The vehicle’s driver had obviously veered off a coastal track – on which four-wheel drives are banned anyway – and crossed the rocky shore.

A second piece of Aboriginal heritage I sought out – hollows dug out to anchor huts –  also had evidence of more recent times. There was a rusty Boag’s beer can in one of the hollows, an excavation that had once housed a shelter constructed of kangaroo hides and bent tea-tea branches.

My adventure on the West Coast came to mind last month when I read of a protest rally by several thousand four-wheel-drive enthusiasts over the Tasmanian Government’s plans to restrict vehicle access to tracks on  coastal stretches of the Arthur-Pieman Conservation Area.

From July 1 the Parks and Wildlife Service is closing nearly 50 per cent  of tracks to four-wheel drive vehicles, quad bikes and motorcycles.

The Government cites protection of Aboriginal sites, damage to a fragile environment and disturbance to beach-nesting birds for its action and it was interesting to see evidence of this when I spent two nights a few years back at a nature reserve, Kings Run, near the Arthur River, which is devoted to saving the Tasmanian devil.

The owner and eco-tourist operator, Geoff King, had voiced concern about the behaviour of off-road drivers on tracks that cross his property but at the time said he did not want to voice these, fearing retribution from the more extreme elements of the four-wheel-drive lobby.

Now King, in a front page story in the Australian newspaper, has come out publicly in support of the curbs.

The issue has split the far north-west community, and even families. Geoff King is a case in point. His brother, Perry, a four-wheel drive enthusiast as well as being a member of the Arthur-Pieman Conservation Area Management Committee, is opposed to the restrictions, maintaining that education about the heritage and natural values of the region is the best approach because, if banned, some angry four-wheel drivers will merely ignore signs limiting their access.

The battle of the beaches has come early this year. Traditionally the war of words concerning Tasmania’s coastline only starts in spring when people and beach-nesting birds lay claim the same beaches.

Usually it mainly applies to the sandy beaches of the East Coast on which hooded and red-capped plovers and pied oystercatchers try to nest. With the Arthur-Pieman entering the frame, angry words form a strange duet with the piping call of a bird of the West’s rocky shore, the sooty oystercatcher.

Silent and brooding, the Shy Mountain does not have to speak her name. We know she’s there, watching … END_OF_DOCUMENT_TOKEN_TO_BE_REPLACED

Although written more than 30 years ago, The Falconer of Central Park has remained popular ever … END_OF_DOCUMENT_TOKEN_TO_BE_REPLACED

Tasmania might be known internationally as the home of the Hollywood cartoon character, Taz, based … END_OF_DOCUMENT_TOKEN_TO_BE_REPLACED