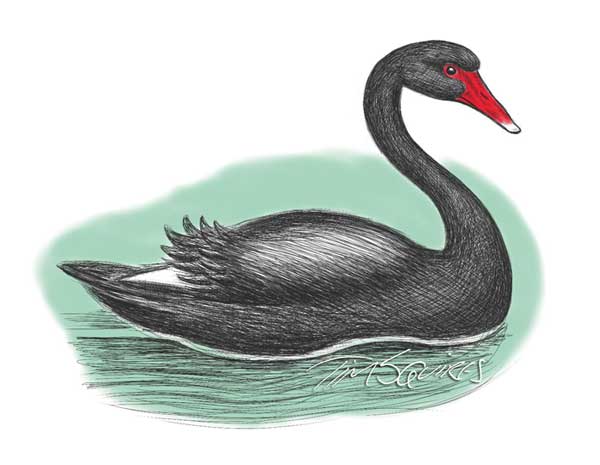 A pair of black swans with three cygnets splashed about a wet paddock bordering the Huon River, oblivious of my interest in them.

The paddock was coated in frost after a cold snap at the start of spring had dumped snow on the distant Mt Wellington. The swan family did not seem to mind, however. There was plenty of new-growth grass to chew on, and the rising sun was burning off the frost. Soon summer would be here.

Black swans are some of the most beautiful, elegant birds on the planet but how often do we stop to watch them going about their business. They are merely part of the Tasmanian backdrop and so often we take them for granted.

It was not always so. The Dutch sea captain Willem de Vlamingh exploring the coast of what was to become Western Australia in 1696 couldn’t comprehend that a bird he knew from Europe, the white swan of legend, could actually come in a black version on the other side of the world. Captain de Vlamingh named the SwanRiver after them and some of the pictures painted by the ship’s artist of that expedition have black swans in them.

My latest black swan encounter on the HuonRiver came by chance when I was summoned hurriedly to Franklin by an early morning phone call to my Hobart home. My son’s rowing crew had forgotten a vital piece of equipment for an event and I reluctantly, at 7am when I was still in bed, volunteered to dash into the HuonValley to deliver it.

Seeing I was down at Franklin, I decided to check out some wet paddocks and marshland along the river where swamp harriers can always be found, and sometimes swift parrots in forests in the steeply-sided hills that line the river. I drew a black on both species but lingered on the riverbank instead to view the swans.

The black swan, like the other six swan species worldwide, pair for life and form happy, contented bonds which can be predator-free if they stick to lagoons and marshes, and build their big, reedy nests in inaccessible places.

A serious problem for the black swans, however, is the annual moult which sees them stripped of flight feathers and grounded for a month or so. It is at these times that they congregate in wide expanses of water – the Derwent at Bridgewater is a good place to find them in large numbers – so they are safe from predators.

It worked for eons until white settlers invaded swan territory 200 years ago. No doubt the Aborigines would also have taken swans both inside and outside the moult but this toll would have been small. It was only when Europeans arrived that swans were killed on a commercial scale in their thousands, possibly hundreds of thousands, for meat and feathers.

In the late 1800s it looked for a time that because of over-hunting the swan might actually vanish from Tasmania but a local politician, Charles Meredith, introduced a bill in the House of Assembly to protect the species. There is a memorial to him on the Queens Domain and every time I pass it on my way to the Hobart Aquatic Centre I say a thanks to the politician for having such foresight. Without him, my annoyance at having to make a parental-duty, early morning dash to Franklin would not have been assuaged by the wonderful sight of a swan family leaving their webbed footprints in the frost.

Silent and brooding, the Shy Mountain does not have to speak her name. We know she’s there, watching … END_OF_DOCUMENT_TOKEN_TO_BE_REPLACED

Although written more than 30 years ago, The Falconer of Central Park has remained popular ever … END_OF_DOCUMENT_TOKEN_TO_BE_REPLACED

Tasmania might be known internationally as the home of the Hollywood cartoon character, Taz, based … END_OF_DOCUMENT_TOKEN_TO_BE_REPLACED