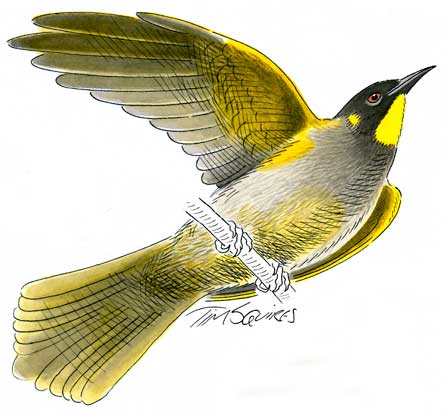 I have always suspected that there is more to the yellow-throated honeyeaters in my  garden than meets the eye.

They are not only creatures of subtle beauty, and a joy to watch, but I have now learned that their very presence in my wattles and bottlebrushes is actually increasing the value of the Knowler “mansion” in Dynnyrne. In fact, if I take into account the other species that are deemed “special” I might even be able to take out a mortgage for an extra wing.

The checklist of around 60 species of birds spotted in my garden was something I had not thought about sharing with my bank manager, or the local estate agents, until I read of research in the United States which drew a direct correlation between rising house prices and the question of how many species of birds were sitting on the garden fence.

An innovative study of home sales in Lubbock, in the state of Texas, suggests that planners can use bird counts to analyse not just the ecological values of urban landscapes but their financial worth to home-owners.

The researchers set out to assess just what benefit open green spaces could add to a neighbourhood and thus home prices in the area. They found that birds, or more precisely those listed on birder’s garden checklists, gave a good indication of an area’s environmental health, and in turn its attractiveness for home hunters.

“A problem urban ecologists and ‘new urbanists’ often face is the difficult task of completing ecological-environmental evaluations in a timely and cost-effective fashion,” wrote Michael C. Farmer and colleagues at Texas Tech University in Lubbock, in their study, Urban Ecosystems.

They said that,  as a result, planning officials  rushed to issue permits that often deemed all green spaces, such as public parks, beneficial—even though ecologists knew “that not all green spaces are equally valuable”.

The researchers decided to see whether bird surveys might offer a solution. They collected information on 368 home sales in 17 neighbourhoods in Lubbock during 2008-09. Then they conducted bird counts in the vicinity of each home, recording both the total number of birds and the number of “less-ubiquitous” species. They also used Google Earth to estimate the percentage of tree cover in the area surrounding each sale. Finally, they constructed a model that related bird abundance and species richness to home prices.

The model suggests that the presence of birds that are less common helps home prices soar. On a lot that already had one species not commonly seen, the addition of a second such species improved mean home prices by more than $US32,000.

Although the research team warned that this number “should not  be taken too literally”, it suggested the presence of less common birds indicated a varied ecosystem — mainly  one with a variety of trees and shrubs.

Remarkably, the finding is in line with at least one ecological study I know of in Hobart that shows that more diverse birdlife tends to inhabit ecosystems with vegetation of various heights, or as the American researchers put it “vertical diversity”.

One of the birds the Americans researchers said could put tens of thousands on the price of a home was the bluejay, a species found across the eastern and central United States. In terms of being “special” my yellowthroats are only found in Tasmania, and armed with that  knowledge I’m already planning the east wing.

Silent and brooding, the Shy Mountain does not have to speak her name. We know she’s there, watching … END_OF_DOCUMENT_TOKEN_TO_BE_REPLACED

Although written more than 30 years ago, The Falconer of Central Park has remained popular ever … END_OF_DOCUMENT_TOKEN_TO_BE_REPLACED

Tasmania might be known internationally as the home of the Hollywood cartoon character, Taz, based … END_OF_DOCUMENT_TOKEN_TO_BE_REPLACED