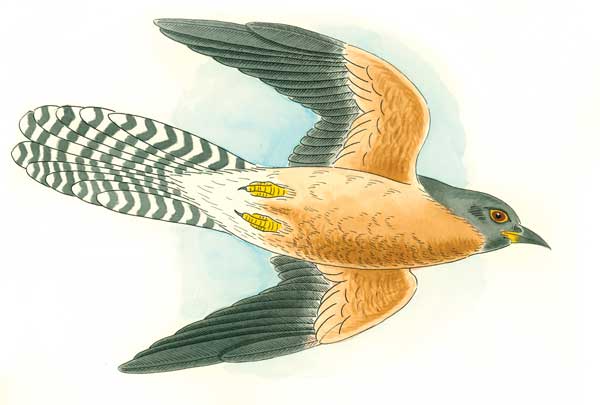 The fan-tailed cuckoo sat low in a white peppermint gum on the slopes of Mt Wellington, surveying the steep hillside that fell away before him. Unlike me, he was not there for the view. He was hatching a dastardly plan.

I had heard the trilling, descending song of the cuckoo as I searched for a Bassian thrush’s nest I had discovered last year near Sphinx Rock half-way up the mountain and was wondering if the birds would use the same site again. At first I didn’t stop to try and locate the cuckoo in the treetops. I’m not a cuckoo fan, I’m afraid, and never bother to seek them out.

This cuckoo, though, cried out to be seen. It was calling from its perch right in front of me and I felt compelled to stop and study it.

And what a beautiful sight he made. A male in fine, new spring plumage, light grey feathers on the head and back, pink on the breast, and a long, barred black-and-white tail which gives the species its common name.

I mention that I’m not a cuckoo fan, and it’s all to do with their parasitic behaviour of tricking other birds into rearing their young.

In the bird world, the cuckoo – at least to my eyes – is the ultimate sociopath, taking from society without giving back. The presence of the cuckoo causes anxiety and disquiet among the other feathered members of the neighbourhood. My observations over the years confirm that birds used as surrogate parents are aware of the cuckoo’s behaviour. Every spring I see superb fairy-wrens, brown thornbills and black-headed honeyeaters, among many other small species, mobbing and chasing the cuckoos away from their breeding areas.

Still the cuckoos succeed, as is evident by the large number of cuckoos calling in the spring. In the Hobart suburbs bordering the bush the calls of fan-tailed and pallid cuckoos can be heard all spring and summer long, with those of a smaller member of the family, the shining bronze-cuckoo. A fourth cuckoo that migrates toTasmania– the Horsfield’s bronze – can also sometimes be heard.

I first became acquainted with the legendary European cuckoo – which makes the sound of the cuckoo clock – growing up in Britain and I have seen cuckoos since on three continents but I have always remained unimpressed by them.

I have to confess after watching birds for more than half a century I have never seen a cuckoo chick being fed by smaller, foster parent birds. It’s a popular image, often photographed, of the cuckoo’s wicked behaviour and perhaps if I’d paid more attention to cuckoos I might have witnessed the spectacle.

We can’t be sentimental about nature. It can be brutal and unforgiving, in which only the smartest and fittest survive. The cuckoo is merely playing its own part.

I’d seen fan-tailed cuckoos going about their unsocial business before, but there was something special about the bird I saw on Mt Wellington, its yellow, curved beak quivering as it let out its descending trill.

Soon it would find a mate and she would lay that single egg in the nest of unsuspecting foster parents, after watching them carefully from a concealed position, waiting for them to leave to find food.

In spring the cuckoos scout nests, and I do the same thing, but for different reasons. There’s a connection of sorts with a beautiful, beguiling creature of nature and I really should change my attitude and adopt a different philosophy – and forget for a moment that the Latin term for the fan-tailed cuckoo and its closest relatives is Cocomantis, meaning “evil or ill-boding”.

Silent and brooding, the Shy Mountain does not have to speak her name. We know she’s there, watching … END_OF_DOCUMENT_TOKEN_TO_BE_REPLACED

Although written more than 30 years ago, The Falconer of Central Park has remained popular ever … END_OF_DOCUMENT_TOKEN_TO_BE_REPLACED

Tasmania might be known internationally as the home of the Hollywood cartoon character, Taz, based … END_OF_DOCUMENT_TOKEN_TO_BE_REPLACED