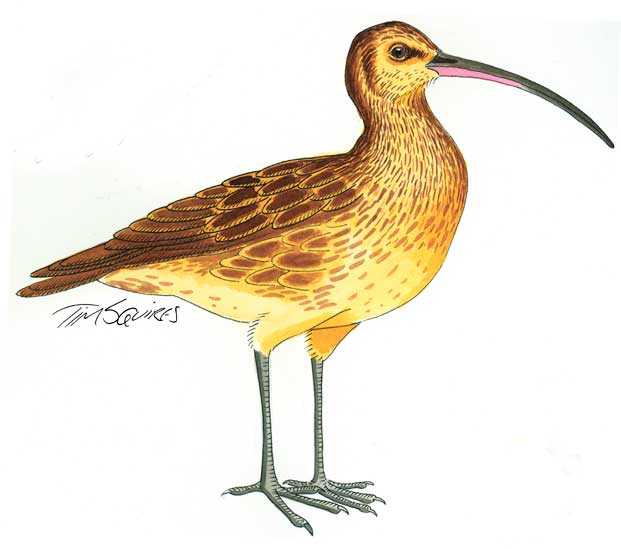 A SENSE of doom and gloom takes flight each winter as bird-watchers in Tasmania contemplate the fate of the shorebirds they waved off on migration at the end of the Tasmanian summer.

Fewer and fewer of the shorebirds that travel all the way from Tasmania’s wetlands to breed within the Arctic Circle  are returning each year to spend the summer here, as they have done for millennia.

A staggering decrease in some numbers of shorebirds has been known to members of BirdLife Tasmania for years but now a much-publicised national report on threatened  birds has confirmed their worst fears and brought home the vast scale of the problem.

As the Hobart Mercury reported recently, the survey found that the status of Australian birds was declining faster than elsewhere in the world. And within Australia itself, Tasmania’s bird species had fared the worst in the past decade of any state and territory.

The Red List Index, compiled every 10 years, shows an accelerating rate of Tasmanian species and subspecies sliding into worse categories, for example from vulnerable to endangered.

The state was already worse off than any jurisdiction in 1990 but the joint study by the University of Queensland (UQ), Charles Darwin University and BirdLife Australia showed that the gap widened from 2000.

Tasmania has two categories of birds recognised worldwide as under pressure –  oceanic seabirds such as albatrosses and migratory waders in the wider grouping of shorebirds – and these largely give the state its unenviable record on threatened species. The decrease in numbers of these species is compounded by the loss of species that only breed in the state, including the orange-bellied and swifts parrots, the forty-spotted pardalote and the Tasmanian sub-species of the wedge-tailed eagle.

The fate of the waders is particularly worrying because of industrial, agricultural and housing development taking place in their migratory feedings grounds in south-east Asia. Many species have traditionally used the wetlands surrounding the Yellow Sea in South and North Korea, and China, but these are being drained at an unprecedented rate in a region that is home to 600 million people.

The chairman of BirdLife Tasmania, Eric Woehler said that since the earliest counts of shorebirds in south-east Tasmania in the 1960s, the organisation had seen a steady loss of birds and a decrease in species diversity in Tasmanian wetlands and coastal areas.

Dr Woehler expressed the greatest concern for the largest migratory shorebird in Australia, the eastern curlew, whose numbers have fallen by more than 90 per cent  in some parts of Tasmania. Other, smaller species of migratory shorebird had seen similar rates of decrease.

“We are recording fewer eastern curlews now in the summer months when numbers are at their peak, than the earliest winter counts from the 1960s – that’s driving home the scale of the loss of birds,” Dr Woehler explained.

Treaties are in place to conserve the staging posts of birds that cross international, and continental, boundaries and the authors of the report say Australians must continue to work with  international partners if they are to save all of Australia’s birds.

This applies not only to shorebirds but oceanic birds, some of which circumnavigate the globe on their migratory journeys. Albatrosses particularly have been hit by the activities of long-line fishermen, the albatrosses being drowned when they take the hooked bait on the ocean’s surface. Among  other threats are predation by feral animals on island breeding sites and ingestion of plastic polluting the world’s oceans.

Of the 21 species of albatrosses recognised by the International Union for the Conservation of Nature,  19 are threatened with extinction.

Silent and brooding, the Shy Mountain does not have to speak her name. We know she’s there, watching … END_OF_DOCUMENT_TOKEN_TO_BE_REPLACED

Although written more than 30 years ago, The Falconer of Central Park has remained popular ever … END_OF_DOCUMENT_TOKEN_TO_BE_REPLACED

Tasmania might be known internationally as the home of the Hollywood cartoon character, Taz, based … END_OF_DOCUMENT_TOKEN_TO_BE_REPLACED