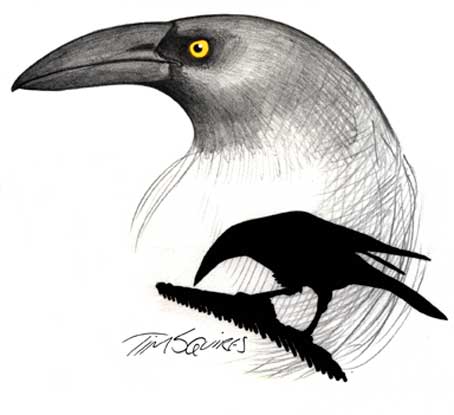 ARTIST Bobby-Z Lambert gets a little help from his friends during the long and lonely hours he spends at the easel in his studio.

The life of a painter can be a solitary one and it is not unusual to see pictures of artists with perhaps a cat, or a patient dog, amid the pots of paint and jars holding brushes.

The great Rembrant might have had  his favourite cat alongside him, but Bobby-Z chooses a feathered friend to go with his setting. Or should I say friends, because it is Tasmanian black currawongs that come to call each day.

Booby-Z had long pressured me to visit him at his Maydena studio to see the currawongs, but I had resisted so far, thinking it was just a ruse to get me to commit myself to buying his latest work in progress. But he seemed sincere enough about the currawongs and so I headed out that way one Saturday with my wife and a friend who had actually bought two of his works in the past. Besides, it was Booby-Z’s birthday and we wanted to take him a birthday cake.

For Booby-Z’s currawongs, however, every day is a birthday. When we arrived on the street where his studio is situated, not sure of its exact location, all we had to do was follow the currawongs flying in the direction of the shed in which is art work is created.

Bobby-Z had arranged canvasses throughout his studio, as a private showing of his latest efforts. I wandered outside, however, to view the 30 or so currawongs that had arrived – more than usual – as if they knew it was a special occasion.

Birds, as I always write in my columns, are an irresistible backdrop to human lives and the life of an artist is no different. Bobby-Z’s shed is surrounded by a paddock and all the while as we viewed his paintings birdsong rang out. Not only black currawongs called but other birds only found in Tasmania- yellow-throated honeyeaters, yellow wattlebirds and native-hens.

The bucolic scene was enhanced by a goat called Tricksy who lives across the street,  and a sheep called Edmund that makes its home on the land in which the studio stands.

The birds and domestic animals, with sometimes a bandicoot in the night, not only intrude on Bobby-Z’s physical landscape but intrude in many of his works. If you look carefully who can see a raven, or currawong, in some of them, although a picture bought by my friends of a raven dipping its beak into a man’s open skull is not to my liking.

I have never inquired of Bobby-Z about its significance, wanting instead to talk about this currawongs, and what he feeds them.

“Fish, meat, you name it, they like it, they like the variety,” he said, “Always appreciative. And I think they talk to me, especially that one,” he added, pointing to a currawong in a wattle.

I usually only see Tasmanian currawongs in alpine areas and  I have written about them as being symbolic of Tasmania’s high country, as opposed to the grey currawong (which is seen in a black form in Tasmania) which usually inhabits lower areas. Here I saw the black currawongs in a different setting, in a rural village where they are part of the fabric of life there. Tasmanians might have a traditional dislike of  ravens, which they often see on carcases in sheep country, but they seem to love currawongs,  giving them their own name in highland towns, black jays.

The jays in Bobby-Z’s environment come down from the high country of the Mt Field National Park in winter – snow-covered peaks that tower over Bobby-Z’s studio –  and choose his garden as their winter retreat. They tend to vanish in summer, save for one or two, including the one that Bobby-Z says always hangs around. I think Bobby-Z has named him Picasso.

After a few glasses of chardonnay I also found myself giving the currawongs names;  Gainsborough, Constable, Turner and George Stubbs, the English masters I studied when I had ambitions to be an artist myself.

During the course of the afternoon Archibald prize winner Geoff Dyer arrived to wish Bobby-Z a happy birthday and view his latest output.  I suggested Dyer might like to paint my portrait but, like Bobby-Z, he only had eyes for the profile of the black jay.

*Bobby-Z is having to vacate his studio, if anyone can offer him space he can be contacted through the author.

Silent and brooding, the Shy Mountain does not have to speak her name. We know she’s there, watching … END_OF_DOCUMENT_TOKEN_TO_BE_REPLACED

Although written more than 30 years ago, The Falconer of Central Park has remained popular ever … END_OF_DOCUMENT_TOKEN_TO_BE_REPLACED

Tasmania might be known internationally as the home of the Hollywood cartoon character, Taz, based … END_OF_DOCUMENT_TOKEN_TO_BE_REPLACED