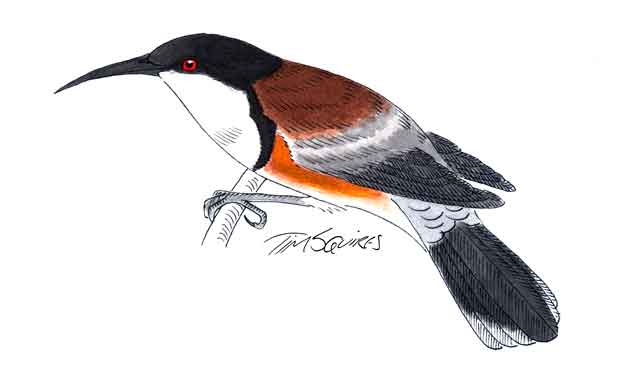 A subordinate clause here, an eastern spinebill there. A split infinitive on the screen, a silvereye in the bottlebrushes beyond the window of my study.

The life of an online sub-editor is not an easy one, not like the days when I worked in the Mercury newsroom which merely offered a view of a red-brick wall enclosing an alley dividing the newspaper building with the post office next door.

That alleyway, though, once produced a rare masked owl, roosting by day on a window ledge. And another time I was summoned out of the building by an eager young reporter, who wanted to show me a party of yellow-tailed black cockatoos perched in the elms of Franklin Square across the road.

These days I’m bombarded if not by birds, but birdsong just beyond the window. And if I dare to look out a green rosella gives me a friendly stare from the silver banksias, or long-time friends, a clan of new holland honeyeaters, try to warn me of a marauding brown goshawk coming to call.

In the 13 years my family and I have lived in our home in the Waterworks Valley the honeyeaters have learned that staying close to a human friend is a way of keeping a bird wary of humans – in this case the feared goshawk – at bay.

I have a checklist of about 60 species seen in my suburban garden – some rarities among them – and for a time I thought that the birdlife this spring and summer had been more prolific than usual. It warranted further investigation and I set out to determine whether the local bird population was actually increasing at a time when numbers country-wide were on the decline. Then it dawned on me I was spending more time at home than in past years, and exposed to more birds.

Consequently casual birdwatching on the way to work each day has now been replaced by a more serious study of just how many species make mine and neighbouring gardens their home.

It’s been hard, though, when work calls, and so do the golden whistlers.

The computer screen takes precedence, of course. Headlines have to be written, split infinitives ironed out, deadlines met. One day just before Christmas, however, a sighting in the garden proved too irresistible to ignore.

Logging on to the computer late one afternoon for a night shift, I heard an unfamiliar sound coming from the dense and tangled branches of an ovens wattle that overhangs the lawn of our garden.

Hidden within the bush was a largish bird that I struggled to identify and I forsook the computer mouse for the binoculars.

The partly-hidden bird was grey-brown in colour with a slightly curved beak. By its ruffled but new plumage I could see it was a juvenile and for a moment I thought it might be a young pallid cuckoo, a species I had heard calling in our valley all season.

Was this to be an extremely rare sighting – well, rare for me – of a cuckoo youngster being fed by much smaller surrogate parents, scarlet robins or honeyeaters perhaps?

I strained to get a good look at the bird for about 10 minutes and when it moved I could see it was not a cuckoo, but a young yellow wattlebird.

It was a good find all the same, because along with a checklist of birds spotted I have a list of breeding birds and this was a first for the garden. I surmised the young bird’s parents had a nest somewhere in the high eucalypts that tower over my garden from the banks of the Sandy Bay Rivulet on its northern boundary.

The youngster appeared well on it way to adulthood. It sat there in the sunshine, preening its fluffy young feathers, its beak and forehead covered in yellow pollen, indicating it was feeding itself and not relying on its parents, and I could see evidence that the long yellow-orange wattles that give the species its name were beginning to grow.

Transfixed by the young wattlebird, a species only found in Tasmania, I suddenly remembered I was supposed to be working. I dashed to the study, only to find I had been logged off.

Silent and brooding, the Shy Mountain does not have to speak her name. We know she’s there, watching … END_OF_DOCUMENT_TOKEN_TO_BE_REPLACED

Although written more than 30 years ago, The Falconer of Central Park has remained popular ever … END_OF_DOCUMENT_TOKEN_TO_BE_REPLACED

Tasmania might be known internationally as the home of the Hollywood cartoon character, Taz, based … END_OF_DOCUMENT_TOKEN_TO_BE_REPLACED