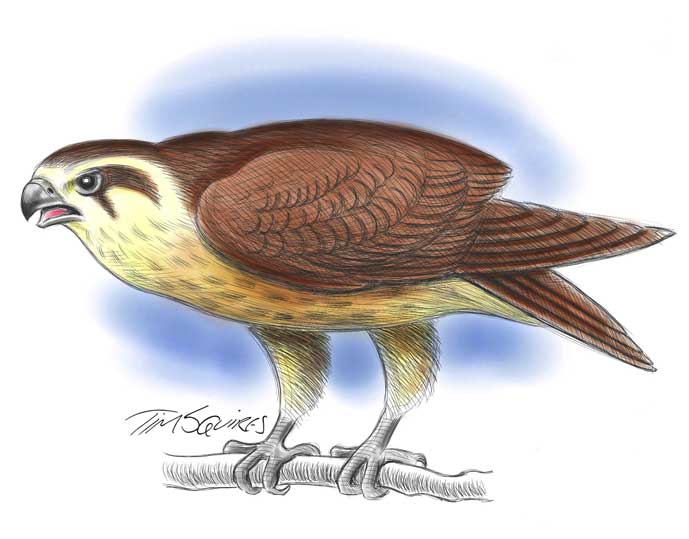 THEY stand sentinel over the Huon Valley, perched on fence posts along the long and winding road that drops down from the high country to Huonville and beyond.

I always see brown falcons on this route and they bring a welcome distraction from what might well be an extraction at the dentist’s down the road.

My dentist has a surgery in Huonville – having transferred there from his previous base in Sandy Bay– and for my visits to him at least I have the probable sight of the falcons to take my mind of matters at hand.

I usually begin to see brown falcons at Grove at the start of the long descent from the north into Huonville and in recent years one falcon in particular has caught my attention, and made me realise that even a trip to the dentist can have its compensations for the bird lover.

The bird in question is a fine male, that displays all the features that this elegant but robust medium-sized bird of prey is known for.

As its name suggests, the brown falcon is a member of the Falconidae family but in appearance and behaviour it mirrors more the traits of the other raptor grouping, the eagles, hawks, goshawks and harriers. The brown falcon could almost be a hybrid between the two.

What separates the two bird of prey groups is basically how they go about killing their prey, and the tools they possess to achieve this.

The eagles and hawks have fearsome beaks and talons and after running down prey, usually on the ground, they use these to inflict the fatal blow.

Falcons on the other hand lack the clutching foot mechanism to catch and kill prey. Instead, they have powerful hooked bills with specialised ‘‘teeth’’ and matching notches which can sever neck bones with one bite

The male brown falcon is a handsome bird, chestnut and honey in colour with a black “moustache” running back from its eye and under its bill which absorbs the glare of the sun when it is about to make a kill.

Unlike other falcons which tend to hunt on the wing, lining up victims while in flight, the brown falcon prefers to station itself on a fence post or other low perch and strike from there.

Because it hunts in open country, often alongside roads like the Huon and Midland highways, the brown falcon is probably the most common bird of prey to be seen in Tasmania, along with the migratory swamp harrier which is only seen in summer.

“Swampies” and brown falcon often hunt the same territory in the Huon and I have seen them both on the trip to the dentist. They are easily told apart, however. The swamp harrier holds its wings high in a v-shape and displays prominent “fingers” at its wing tips. It also a light patch on its rump which is easily seen when the bird is moving away from the observer.

The brown falcon has more of a compact wing, thicker with no fingers, and when perched by the side of the road the moustache is clearly visible. They are roughly the same size at about 50 centimetres in length.

A visit to the dentist is never a pleasant experience and my last resulted in two fillings I had not anticipated. There was a bonus, however. Lying back in the dentist’s chair, the drill about to whir into action, I looked out across open country to the east of  Huonville to see a brown falcon dashing by.

Silent and brooding, the Shy Mountain does not have to speak her name. We know she’s there, watching … END_OF_DOCUMENT_TOKEN_TO_BE_REPLACED

Although written more than 30 years ago, The Falconer of Central Park has remained popular ever … END_OF_DOCUMENT_TOKEN_TO_BE_REPLACED

Tasmania might be known internationally as the home of the Hollywood cartoon character, Taz, based … END_OF_DOCUMENT_TOKEN_TO_BE_REPLACED