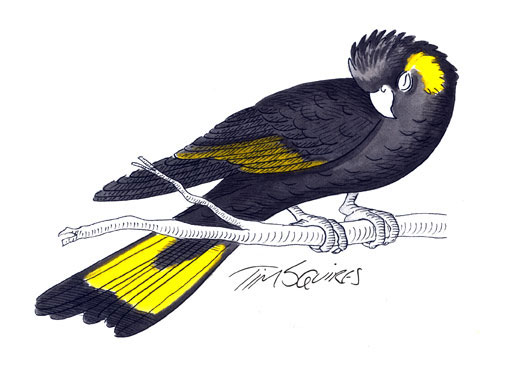 “Phew, what a scorcher” is a headline that came to mind, the sort of thing I would have written during my days as a wordsmith on a tabloid daily newspaper in London.

It was the hottest day on record in Hobart – a staggering 41.8 degrees Celsius – and I headed to Mt Wellington in search of cool air, and birds.

I was disappointed to find that the Pinnacle Road up the mountain was closed because of the extreme fire risk and settled instead for a sheltered and moist gully leading up the mountain from Fern Tree.

Immediately on leaving my car and climbing up a flight of stone steps at the start of the Fern Glade Track I realised I had made the right decision to leave steaming  Hobart behind me.

On the way to the mountain I had seen a forest raven panting by the side of the road, its beak open as it gasped for air, and the woods lining the Huon Road were eerily silent. Above Fern Tree, however, bird song filtered through the canopy, carried on the yellow rays of a late-afternoon sun. Like myself, birds were sheltering from the sun and extreme heat. We had taken refuge in a micro-climate, one controlled by the towering man ferns and leafy dogwood trees.

In places I caught sight of the upper reaches of the mountain though the trees, the peak covered by a blue eucalypt haze. The sultry air outside the glade reeked with the odour of warm oil; it was a though a mountain born of molten rock and its gums designed to exploit heat and inferno, to be reborn from ash, were inviting fire to visit. A day of searing heat always reminds us that we take the mountain and its forests on their terms.

In the shadow of the Fern Glade, a pair of green rosellas flew past and then I heard a young black currawong calling to its parents. Mother soon appeared with a juicy worm, dug up from the leaf litter on the forest floor, and fed the juvenile, downy and grey, with an afternoon meal.

As I ventured further on Tasmanian scrubwrens scurried across the footpath and then a grey fantail struck up in song from the lower branches of a silver wattle. Like the currawongs, fantails were busy feeding fledglings from this year’s crop of new birds.

The sanctuary of the glade could not last forever, and I was soon forced into a warmer area of forest, following a fire trail that leads eventually to the Silver Falls, a kilometre or so south of Fern Tree.

I was hoping that the tributary of the BrownsRiver that feeds the falls would have plenty of water in it and I was pleased to hear it cascading through the steep cutting it occupies as it courses towards the sea.

At the waterfall I had to wait my turn to drink. Two yellow-tailed black cockatoos had got there before me and were dipping their bills into a rockpool under the cascade of water;  throwing back their heads as they drank.

The sun had turned a burnt orange, its power blunted by smoke from distant bushfires ranging across south-eastern Tasmania. As I left the woods the sun threw a menacing  amber light across the patch of ground where I had parked my car.

“Phew, what a scorcher,” I said to my wife as I returned home and it seemed like only yesterday that I was again talking in headlines, at that time joking it had been “Like little Siberia” up there on the mountain during a winter snowstorm.

But January 4 was no laughing matter. Next day the Mercury had a headline of its own, “Hellfire”, reporting more than 100 homes lost in Dunalley in far-distant sight of the mountain.

Silent and brooding, the Shy Mountain does not have to speak her name. We know she’s there, watching … END_OF_DOCUMENT_TOKEN_TO_BE_REPLACED

Although written more than 30 years ago, The Falconer of Central Park has remained popular ever … END_OF_DOCUMENT_TOKEN_TO_BE_REPLACED

Tasmania might be known internationally as the home of the Hollywood cartoon character, Taz, based … END_OF_DOCUMENT_TOKEN_TO_BE_REPLACED