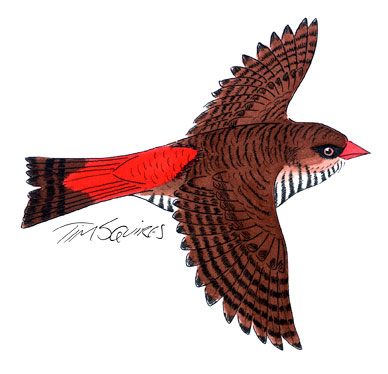 The sea eagles ruled supreme at Eaglehawk Neck, but it was the beautiful firetail that stole the show.

The white-bellied sea eagles had thrilled a party of bird-watchers on one of BirdLife  Tasmania’s regular outings with a display of aerial prowess over the fishing trawlers moored in Pirates Bay. The firetail simply let its stunning plumage do the talking.

Before the firetail had turned up it had proven a pretty unremarkable birding trip, although a fine sunny day had put the small party of birders who had mostly travelled from Hobart in fine spirits.

The outing was led by local birding expert Ruth Brozek who had planned the trip to include both shoreline  and lagoon, native garden and forest to give the birders as many species as possible, although endemics like the dusky robin and strong-billed honeyeater escaped attention.

After leaving Eaglehawk Neck itself and heading for the harbour at Pirates Bay the beautiful firetail showed itself on a footpath leading into wet forest high above the ocean.

It sat on a fence for a brief moment so at least some of the party had a chance to study it. Unfortunately one birder who had never seen a firetail – and desperately wanted to add it to her lifelist of birds spotted – missed the sighting. She was at the back of the party and the firetail had flown before she could get herself into a good position and focus her binoculars.

Identification of the firetail often features in letters and emails sent to me. On the eve of the latest bird walk I had received one such email, wanting me to identify the “little bird with red tail that’s not a robin” that had been seen on another coastal footpath in preceding weeks.

As soon as the novice birder described the red tail, and the fact it was flushed from a track, I immediately knew the answer.

The firetail is the only Australian finch found inTasmania– apart from the imported Old World ones like the goldfinch and greenfinch –  and is fairly common, but elusive all the same. The best chance to see firetails is early in the morning when they feed on seeds that have fallen on paths and roads, before the finches retreat to the bush where they are difficult to find in dense foliage.

As their name suggests they are identified by a fiery red tail which his generally only seen in flight. If they are perched they reveal a finely barred black and white pattern on the chest and a black mask behind a pinkish beak. Except for the chest and tail, the birds are generally chocolate brown in colour and, at about 12 centimetres,  are the size of a silvereye and smaller than a sparrow.

The birders were still talking about the firetail when the group returned to the car park at Pirates Bay. It was then that the sea eagles – a pair of them – put on their show, soaring amid terns and gulls who were complaining about their presence. To add to the spectacle a seal poked its head from the water to watch the aerial display.

And the birder who had missed out on the firetail had some consolation, not just in the eagles but in spotting a  flame robin – seen  while  on her way to buy an ice-cream at the Pirates Bay snack bar.

Silent and brooding, the Shy Mountain does not have to speak her name. We know she’s there, watching … END_OF_DOCUMENT_TOKEN_TO_BE_REPLACED

Although written more than 30 years ago, The Falconer of Central Park has remained popular ever … END_OF_DOCUMENT_TOKEN_TO_BE_REPLACED

Tasmania might be known internationally as the home of the Hollywood cartoon character, Taz, based … END_OF_DOCUMENT_TOKEN_TO_BE_REPLACED