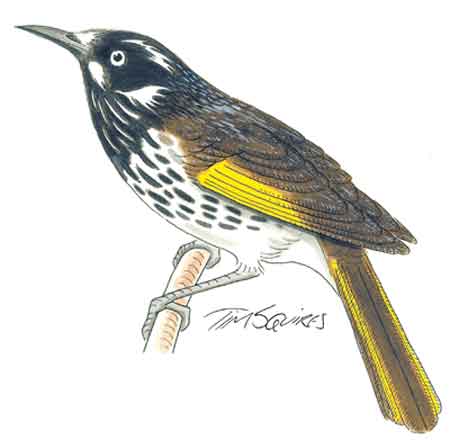 Some birders I have met have this ability to literally charm the birds out of the trees. They are masters of the ancient birding art of “pishing” – making bird sounds by pursing the lips to attract the target bird’s attention.

Birds are innately curious and any unfamiliar sound that vaguely resembles a bird call will entice them to come and have a look.

My attempts at pishing usually fall on deaf ears but I decided to hone my skills recently in readiness for late spring and summer when birds are most vocal. I was surprised that the resident clan of new holland honeyeaters in my garden emerged from the early-flowering grevilleas to see what I was up to.

They soon lost interest, however, and retreated, having grown used over the years to my antics when I invariably try to make conversation with them.

A pish – I have no idea where the term comes from – is achieved by pursing the lips, or clenching the teeth, and either breathing out or sucking air in a regular tempo to make a kind of churring, kissing sound.The technique is used by scientists to increase the effectiveness of bird diversity surveys, and by birders to attract species that they might not otherwise see.

British birdwatchers make a kissing sound, and those in the United States prefer a “churr” which is closer to the sound made by a member of the Old World titmice family, the black-capped chickadee.

When my travels took me to South Africa, I discovered there that South African birders tried to replicate the song of a warbler, the rattling cisticola, as the basis of their pish. As the name implies, the “song” is a harsh sound which is easily mimicked.

Some birders in Australia use a variant of pishing called “squeaking” (making a kissing sound against the back of one’s hand) to which honeyeaters, whistlers and fantails are attracted.

What has occurred to me in the 16 years I have lived in Australia is the growing reliance on not pish sounds but recorded ones played to birds on smartphones, iPads and tablets.

A great defence of what’s called playback was mounted in Australian Birdlife magazine saying that faithfully recorded mating and territorial sounds were no more harmful for birds than pish sounds that might be construed by birds as an alarm call, or young in distress.

My research, however, suggests otherwise.

In one American study it was discovered that a chickadee hearing a loud resonant recording of a singing male ignored local songsters and went in search of the perfect mate which she never found. The chickadee did not breed that year.

I am of the old school of birder who eschews playback devices. Part of the thrill of birding is tracking down species using the art of detection and, perhaps on occasion, the pish.

With recorded song the target birds immediately respond if they are in the area and close by. I liken birding to fishing in that a day spent in a wood or by a river is never wasted, even if no uncommon birds are seen or no fish caught. Catching a fish, or seeing a sought-after bird, is merely a bonus, the cherry on the cake.

Silent and brooding, the Shy Mountain does not have to speak her name. We know she’s there, watching … END_OF_DOCUMENT_TOKEN_TO_BE_REPLACED

Although written more than 30 years ago, The Falconer of Central Park has remained popular ever … END_OF_DOCUMENT_TOKEN_TO_BE_REPLACED

Tasmania might be known internationally as the home of the Hollywood cartoon character, Taz, based … END_OF_DOCUMENT_TOKEN_TO_BE_REPLACED