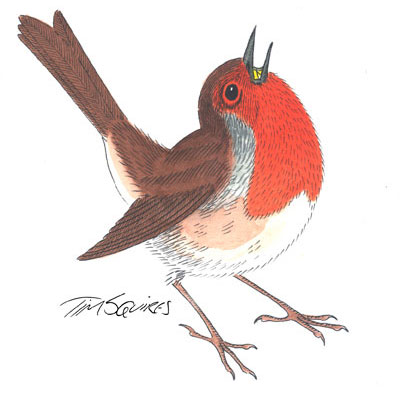 The Eagles, Hawks, Magpies and Crows…. Birds have a potent, symbolic connection with Australian winter sport, especially that played on the footy oval.

I might not be as passionate about Australian rules football as I am about soccer but I can understand the obsession with footy. It’s rooted in the bond between father and son, and in many cases daughter, and the rite of passage that sees the magical, unforgettable first visit to a major game.

My son’s initiation came relatively late, at the age of 22, when earlier this year we visited the home of the mighty Arsenal in north London, and it proved for me not only an emotional connection with English football and my sporting heritage, but with British birds and birdsong of my youth.

Arsenal – the Gunners –  might not have a nickname associated with our feathered friends, like so many AFL teams, but all the same as a young boy growing up in London I gave them my own name to reflect my passion for wildlife. I called them the Robins, after the birds I always saw in the gardens of the Victorian terraced houses surrounding the old Arsenal stadium of Highbury when I was first taken there by my dad in the 1950s. Like the “robin redbreast”, the Gunners also wore red.

The robins were still singing on a freezing, grey winter’s day in February this year when a new generation of Knowlers went to see Arsenal at their new Emirates ground, a short distance away from the Highbury stadium where I used to stand on the terraces with my dad. It was all so familiar, like a song on the radio that takes you back in time. The chorus of the robins anchored me in time and place, as much as the chiming of magpies will always tell a travelling Australian they have returned home.

I was seven years old when I saw my first professional game. Growing up in Australia, it meant my son had to wait considerably longer but there was a bonus for both him and myself in the tradition of the rite of passage – I could buy him a pint in a pub near the ground, as it happened with an oblique bird theme. It was named The Famous Cock.

My son eschewed warm English beer for super-chilled Fosters, and one pint soon turned to three before a meal of fish and chips wrapped in an edition of a day-old newspaper. The super-chilled beers, however, did not blunt my British bird-watching skills after the 16 years away in Australia.  Along with robins there were blue and great tits, song thrushes and the familiar European blackbirds from my current home in suburban Hobart. There was also a surprise. Feeding on holly berries in a Highbury garden  was a flock of redwings, small thrushes that visit southern England in the winter months, when their homeland of Scandinavia and northern Russia freezes over.

For the record, Arsenal triumphed over Aston Villa in an exciting game before  my son and I tramped the streets looking for more ale houses, passing the old Highbury Stadium, the art deco facade of which now fronts a block of upmarket apartments.

I couldn’t coax my son to drink English beer, despite explaining that it was actually not warm but served at cellar temperature, a temperate  no doubt near freezing as it was one of  the coldest winter days in recent years.  However, ordering the Fosters from the Australian barmaid there was some consolation for me. I discovered the pub had a fine West Country ale called Yellowhammer, the name of a finch I also remembered from my childhood.

“Give it a try,” I pleaded with my son, “and nourish your Pommie soul.”

A rite of passage has its limits. My son stuck to his guns and continued with the super-chilled Australian lager.

Silent and brooding, the Shy Mountain does not have to speak her name. We know she’s there, watching … END_OF_DOCUMENT_TOKEN_TO_BE_REPLACED

Although written more than 30 years ago, The Falconer of Central Park has remained popular ever … END_OF_DOCUMENT_TOKEN_TO_BE_REPLACED

Tasmania might be known internationally as the home of the Hollywood cartoon character, Taz, based … END_OF_DOCUMENT_TOKEN_TO_BE_REPLACED