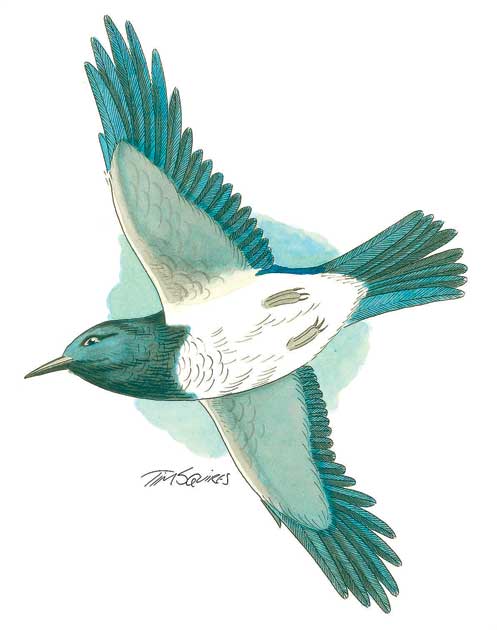 The forests below Mt Wellington have been ringing with the song of the beautiful satin flycatcher during the summer.

The species has proved elusive in the past but this year hardly a day goes by on my travels on the lower slopes of the mountain, or in its forested foothills closer to the city, I do not hear it either making its cheerful, rhythmic whistle, or a harsher note that sounds like the chirring of crickets.

So familiar has the bird become that I can now identify them in the highest treetops, without the aid of binoculars. The satin flycatcher might be only about 16 centimetres long but it can easily be told apart from other birds of the canopy by the nervous quivering of its body and tail-wagging.

In the past I’ve mainly seen males but this breeding season has brought males and females together, often singing sweet duets before sorties to snap at flying insects.

One female took great delight in catching a butterfly and showing it her mate.

Late-spring I was wondering if I had just been lucky this year, stumbling on a series of breeding territories but when I read of literature related to Tasmanian sightings I learned that sometimes there appears to be an explosion of the migratory satin flycatchers making their way across Bass Strait from the mainland.

An edition of Michael Sharland’s Tasmanian Birds  dating from the late 1950s  reported that such an arrival occurred in 1951, when satin flycatchers were seen and heard from areas where they were not previously reported in great numbers.

The male satin flycatcher is a truly magnificent bird and a day hunting for them in forests is well spent. The male carries a dark, iridescent hood and back on a silver body. The head has a small crest and the bill is long and blunt for spearing insects, or prising them from bark and leaf in the under-canopy. Although it’s called the satin flycatcher, the male is generally painted as black in bird book illustrations, but the specimens I see have more of a midnight blue about them, their feathers possibly reflecting the sky on summer afternoons.

The female is less showy but all the same carries subtle beauty about her.  She has a greyish-brown hood and back, with a russet chin on white lower body.

The satin flycatcher is found along the east coast of Australia from far northern Queensland to Tasmania, including south-eastern South Australia. It is also found in Papua New Guinea.

The flycatcher builds one the most beautiful  nests of all birds but I have never tried to find one, simply because locating the birds has proved difficult enough and when I have finally found them the breeding season, at least the nest building stage of it when birds can be seen carrying nest materials through the treetops, has virtually finished.

The tiny nest lies flat on a horizontal branch in the upper canopy. It is broad-based and cup-shaped, built of shredded bark and grass, coated with spider webs and decorated with lichen. Both sexes build the nest, incubate the eggs and feed the young.

Another, rarer family member can sometimes be seen in Tasmania, the leaden flycatcher, which as its name suggest, looks dark gun-metal grey in appearance.

It takes great skill to tell the two apart but after my glut of satin flycatchers this summer, I’m up for the task and I’m seeking out the rarer ones before they return to the mainland.

Silent and brooding, the Shy Mountain does not have to speak her name. We know she’s there, watching … END_OF_DOCUMENT_TOKEN_TO_BE_REPLACED

Although written more than 30 years ago, The Falconer of Central Park has remained popular ever … END_OF_DOCUMENT_TOKEN_TO_BE_REPLACED

Tasmania might be known internationally as the home of the Hollywood cartoon character, Taz, based … END_OF_DOCUMENT_TOKEN_TO_BE_REPLACED