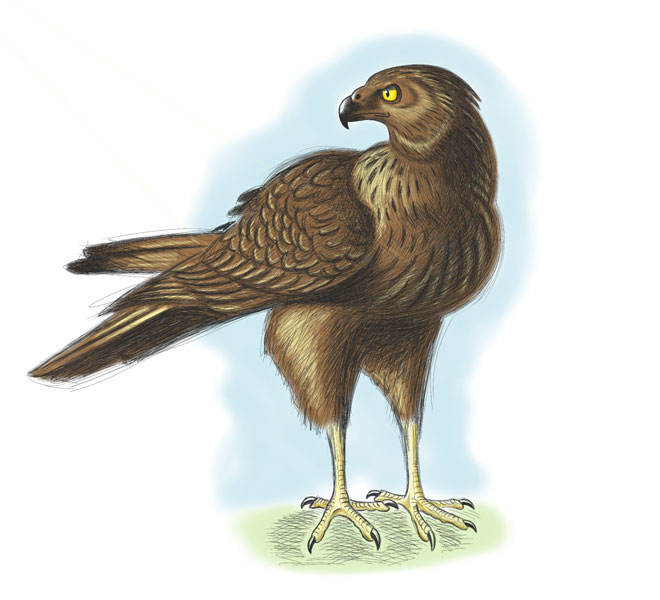 MY phone rang hot towards the end of winter, with readers reporting the first arrival  of swamp harriers from the mainland.

There was a call from Lauderdale in the first week of August and then another from Ouse in the DerwentValley. I am usually the last to see these things but on the day of the Ouse call I had the shock of my life, witnessing a harrier sweep across the Tasman Highway as I drove to Sorell.

The harriers are Tasmania’s only migratory birds of prey and they time their arrival to coincide with an early nester, the masked lapwing, and the first hatching of lapwing chicks.

A few weeks before spotting my first harrier of the season I had been reminded of their imminent arrival by the sight of two lapwings doing a merry mating dance on the roof of the Hobart Aquatic Centre on the Queens Domain. Urban lapwings, however, usually escape the attention of harriers which tend to steer clear of built-up areas and make their summer homes in low-lying paddock and marshland.

Birds of prey – beyond the kings of the skies, the wedge-tailed and white-bellied sea eagles – can be difficult to identify in flight, particularly the females which tend to be about the same size and brown in colour. The harriers, however, are easy to spot, mainly by their characteristic low flight on upswept wings, in which they quarter grass and marsh in the hope of flushing either chicks or small rodents. An added aid to identification – perhaps the most important field mark  – is a white or pale-coloured rump at the top of the tail feathers which is easily noticeable and something other raptors do not possess.

At first, I only got a fleeting glimpse of the harrier along theTasman Highway from behind the  wheel of my car but the white rump told me immediately what it was. I couldn’t resist pulling off the highway to study it and the harrier made a wonderful sight as it twisted and turned just above the ground against the backdrop of a snow-covered Mt Wellington in the distance.

The harriers, like all birds of prey, are totally protected in Tasmania but many of them still come to grief in paddock and field during the summer months.

Farmers are not the enemy, but the machines they use to mow grass for hay, and cut corn and other cereal crops. The harriers are ground-nesters, concealing nests of straw among clumps of low vegetation  and  cannot defend their eggs and young against the threshing onslaught, with females incubating eggs often also being cut to pieces.

Farmers, all the same, are not without sympathy and I know of some land-owners who take the trouble to study harriers on their properties to determine where they are nesting.  The farmers then mark the general location of the nest with a pole and at cutting time avoid the area, creating an oasis of long grass to give the harriers a chance.

It is in the farmer’s interest, of course, to provide a secure and safe home for the harriers. When the lapwing breeding season is over, the harriers turn their attention to mice and rats and take vast numbers of these, ridding the farms of pests that not only eat valuable crops, but are expensive to eradicate.

It is the same with other birds of prey, particularly owls, and when I visit farms I am always reminded of the wonderful bond that farmers in my homeland of Britain have with the barn owl. The owl – which is also native to Australia, and is a close relative of the masked owl more commonly found in  Tasmania  – gets its name from its habit of nesting in farm buildings. A feature of ancient, stone-built barns in Britainis the holes built into walls which provide access for the owls.

Silent and brooding, the Shy Mountain does not have to speak her name. We know she’s there, watching … END_OF_DOCUMENT_TOKEN_TO_BE_REPLACED

Although written more than 30 years ago, The Falconer of Central Park has remained popular ever … END_OF_DOCUMENT_TOKEN_TO_BE_REPLACED

Tasmania might be known internationally as the home of the Hollywood cartoon character, Taz, based … END_OF_DOCUMENT_TOKEN_TO_BE_REPLACED