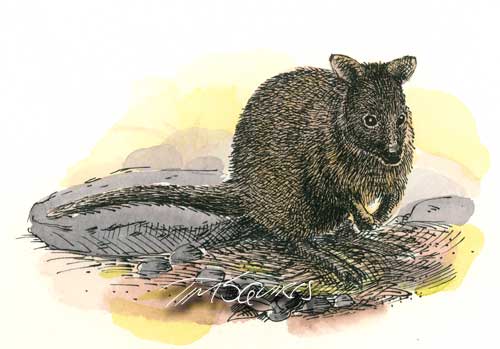 PIGS may fly, as the expression goes, but the owner of the Inverawe Native Gardens at Margate was hardly prepared for the sight of a flying pademelon.

There was Margaret Chestnut one autumnal afternoon, tending some newly-planted shrubs, when she saw what looked like a pademelon land with a thump right in front of her. Yes, her eyes were not deceiving her. It really was a pademelon that had apparently fallen right out of the sky.

Mrs Chestnut moved forward to determine if the still-alive marsupial was injured and suddenly felt the eyes of a wedge-tailed eagle on her. The eagle had landed nearby and clearly this was the reason that  the pademelon had taken to the skies. The pademelon had been nonchalantly chewing grass in the gardens and had not see the approach of the hungry eagle, which apparently  gripped it in its talons and attempted to carry it to a spot where it could be killed with ease, and eaten.

Mrs Chestnut surmised that the eagle had bitten off more than it could chew, so to speak. The pademelon, although a smallish juvenile, was too heavy to be carried aloft to a decent height  and it had slipped from the eagle’s grasp. The eagle had landed again, possibly planning to spear the marsupial on the ground this time and eat it then and there. But Margaret Chestnut intervened. She and the eagle eyed each other off for a few moments before the eagle decided to surrender its catch, and it flew away over the adjoining North-West Bay without looking back.

When Mrs Chestnut examined the still stunned pademelon it appeared no worse off for its ordeal. There were no obvious signs of bleeding and broken bones and so she placed the pademelon under a low bush, out of sight of the eagle if it should return.

Mrs Chestnut’s told her tale to me when I turned up at Inverawe for the gardens’ first birding breakfast last month.

Since the gardens opened 11 years ago Margaret and her husband Bill have had many exciting encounters with birds but none quite like the one with the eagle.

The gardens, in fact, have become a leading birding destination and have clocked up 93 species in its 9.5 hectares. These include all of Tasmania’s 12 endemic birds and endangered species that include not only the wedge-tailed eagle but the white goshawk and swift parrot.

The bird list actually stood at 92 but during the breakfast bird walk I managed to find a new species for Inverawe, the grey teal. A small flock of the diminutive ducks were resting in the far corner of the reserve, at the mouth of the North-West BayRiver.

The teals were not quite as dramatic as the bird that had marked number 90 on the list earlier in the year – a masked owl – but the bird-watchers attending the birding breakfast were grateful for the sighting all the same. In all we saw about 30 species in a couple of hours, not bad for a chilly winter’s day that threatened rain.

As so often happens with bird outings, some of the most dramatic birds –  including the wedge-tailed eagle –  did not show,  but no one was complaining.

I went in search of the pademelon that had escaped the mauling by the eagle but it couldn’t be seen. Margaret Chestnut had seen it a few days previously munching on native grass in an exposed part of the gardens, well in sight of any eagle that might be passing. Clearly the pademelon taken aloft had not learned its lesson.

Silent and brooding, the Shy Mountain does not have to speak her name. We know she’s there, watching … END_OF_DOCUMENT_TOKEN_TO_BE_REPLACED

Although written more than 30 years ago, The Falconer of Central Park has remained popular ever … END_OF_DOCUMENT_TOKEN_TO_BE_REPLACED

Tasmania might be known internationally as the home of the Hollywood cartoon character, Taz, based … END_OF_DOCUMENT_TOKEN_TO_BE_REPLACED