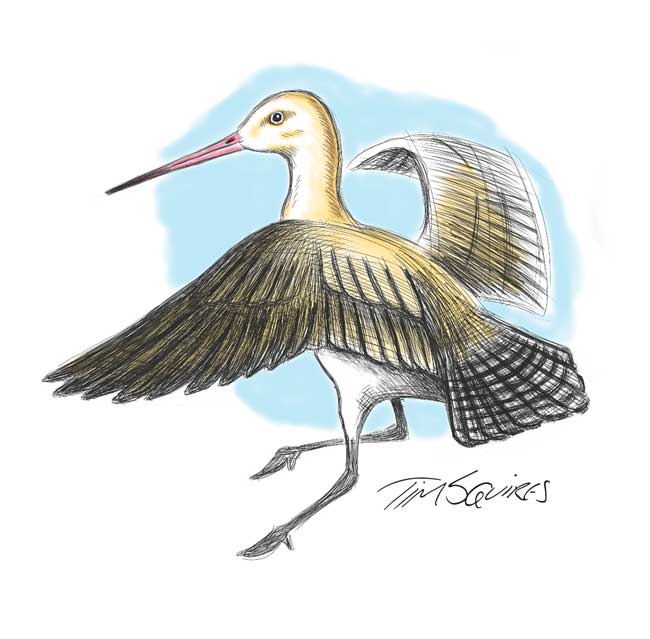 The bells of Christchurch Cathedral once rang out each September to herald to return of the New Zealand harbinger of spring, the bar-tailed godwit from their breeding grounds within the Arctic circle.

The bells might be silent now following the devastating earthquake that destroyed much of the city last year, including the cathedral’s bell tower, but the people of Christchurch still rejoice in the arrival of the godwits.

My sister who lives in Christchurch found time from patching up her home severely damaged in the quake to clip a cutting from a local newspaper about the arrival of “our favourite feathered visitors”.

Godwits finding a summer home in New Zealand during the northern winter also reach Tasmania at the far south of their migration range and when I received my sister’s letter I set out to find some visitors of my own. I didn’t have to go far, spotting a flock of about 60 godwits resting on a sand bar at high tide in Pittwater Lagoon near Sorell.

The date given for the arrival of the first godwits on the mudflats near Christchurch was the last week of September and I presume that Tasmanian birds would have arrived at about the same time.

The New Zealand report said the godwits had turned up later this year, possibly because of unfavourable wind patterns in Alaska.

The migratory journey of the godwits is one of the most remarkable in nature because the birds compete most of the epic journey by flying non-stop for more than 11,000 kilometres.

The record non-stop flying distance for any bird is held by a godwit fitted with a tiny radio transmitter which travelled 11,680 km from the Yellow Sea in China to Zealand in eight days. The bird was on the last leg of its migratory journey which started out in Alaska.

Viewing the Tasmania arrivals in early October as they happily probed the mudflats for marine worms and other invertebrates I found it difficult to comprehend how such seemingly frail and delicate birds could make a journey from one side of the world to the other.

Godwits are actually quite big for waders, measuring about 40 centimetres from tail to the tip of their long beaks. They are very easy to identify, even without binoculars, because they stand tall on long gangly legs. The beak is also very long and slightly upturned. The only other birds they could be confused with are eastern curlews and whimbrels, which have markedly curved beaks.

My sister might attest to the anguish the people of Christchurch have suffered at the hands of nature, but they still can find a place in their hearts for the remarkable godwit.

The earthquake of February last year – which followed a smaller one six months previously – killed 185 people but the city is slowly being rebuilt and its people are looking to the future with renewed hope. The sight of the godwits helps fuel their optimism

As a spokesman for the Christchurch City Council said, the arrival of the godwits was always a “relief and a celebration”.

“The marathon birds have made it, life goes on.”

Silent and brooding, the Shy Mountain does not have to speak her name. We know she’s there, watching … END_OF_DOCUMENT_TOKEN_TO_BE_REPLACED

Although written more than 30 years ago, The Falconer of Central Park has remained popular ever … END_OF_DOCUMENT_TOKEN_TO_BE_REPLACED

Tasmania might be known internationally as the home of the Hollywood cartoon character, Taz, based … END_OF_DOCUMENT_TOKEN_TO_BE_REPLACED