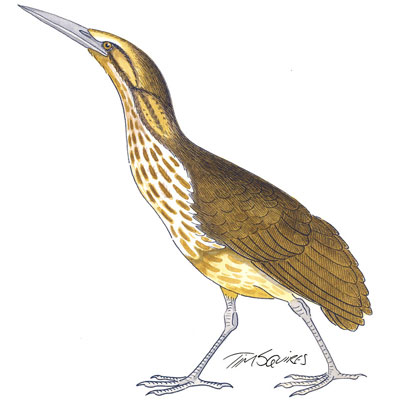 The great bittern hunt started early one morning with the mist still hanging like candyfloss on the hills framing the HuonValley.

The reedy wastes of the Egg Islands in the Huon River at Franklin is home to the rare and elusive bittern and I was part of an expedition to not only circumnavigate the wild and untamed landmass but to find the endangered bird in one of its last stamping grounds in the state, if not the country.

The eerie and haunting “booming” of the bittern is thought to have given rise to the Aboriginal legend of the bunyip and it still holds a mystery and mystique for anyone who goes in search of this enigmatic heron.

The bittern inhabits shallow wetlands with tall reeds, where it is perfectly camouflaged to blend in with its surroundings, so it is rarely seen. If disturbed it is reluctant to take to the air, merely standing tall with its beak pointed skywards so it is difficult to make out its shape among the similarly coloured yellow and brown reeds.

The Aboriginal folklore identifies the bunyip, because of its loud and sometimes terrifying noises at night, as a possibly malign spiritual creature that lurks in swamps, creeks and waterholes. And so it was not surprising that I undertook this voyage into  the unknown with some trepidation.

I was going by wooden  boat, although a sizeable whaling one, that looked remarkably small in the scale of the great Huon and its islands that at Franklinis at least a kilometre wide.

I was in safe  hands, however. The expedition had been organised by the Living Boat Trust at Franklin and our party fell under the orders of a  crew who knew the  Huon and the whims of its tides. And the whaling craft, the Capricornia, a replica of those that were launched from American whaling mother ships in the 1800s, was more than adequate to handle the local waters.

I had been recruited as the bird expert on the trip and I spent the previous week reading all I could about the bittern, and learning its calls.

There was not much to learn, because not much is known about the bittern. It’s probably Australia’s least understood species and it  has only been determined in recent times that is not nocturnal as previously thought. It merely likes to “sing” at night when, presumably, its calls will carry further across the marshes.

The population of bitterns is numbered at only between 200 to 800 pairs across the entire country and in Tasmania they are found in just a few places where there is suitable reed cover. Like the bitterns, the freshwater or brackish marshes are endangered in not just Tasmania but throughout the rest of Australia. Since European settlement it is estimated that about 50 per cent of wetlands have been bulldozed and reclaimed for farmland or industrial or housing development.

The Egg Islands environment, covering 430  hectares over two main islands, have been preserved in their natural state largely because of the intervention of the Tasmanian Land Conservancy who bought land to be added to areas already declared a conservation zone by the state government.

Out on the water, it proved a poor day for bird spotting, and many of the interesting and rare species associated with the islands failed to show, including the wedge-tailed and sea eagle and the swift parrot, the latter seen feeding sometimes in an ancient strand of black gum (Eucalyptus ovata ) standing on slightly higher ground above  the marshlands that are flooded during hide tides.

But the untamed beauty of the islands made up for any disappointment on the bird front.

Eating a fine lunch in the boatsheds of ling and boiled potatoes, I looked back on the excursion and realised that any hopes I might have had of finding the bittern in such a sea of reedbeds had been misplaced and we would have been extremely lucky to have caught a glimpse of one.

I was not the first to say we had bittern off more than we could chew.

Silent and brooding, the Shy Mountain does not have to speak her name. We know she’s there, watching … END_OF_DOCUMENT_TOKEN_TO_BE_REPLACED

Although written more than 30 years ago, The Falconer of Central Park has remained popular ever … END_OF_DOCUMENT_TOKEN_TO_BE_REPLACED

Tasmania might be known internationally as the home of the Hollywood cartoon character, Taz, based … END_OF_DOCUMENT_TOKEN_TO_BE_REPLACED