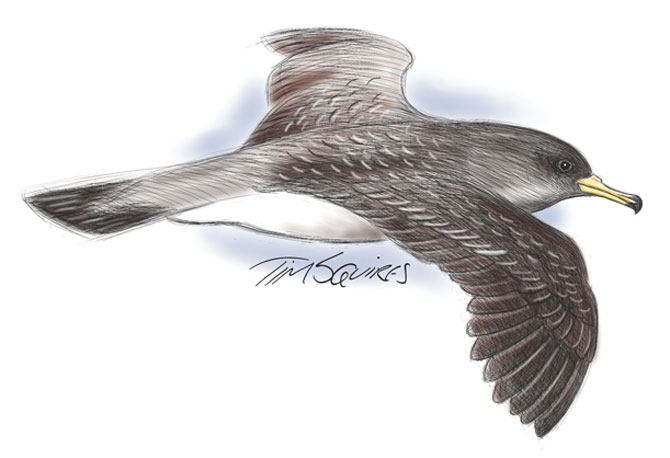 The shearwaters swirled around me in the half-light. I could hear the flutter their wings, feel the whoosh of their feathers as they swept past.

I had gone to The Neck on BrunyIsland to watch penguins come ashore and had overlooked the fact that short-tailed shearwaters – or muttonbirds as they are called in Tasmania– use the same stretch of Bruny coast as their summer home.

Silly of me not to be thinking shearwaters that are so common in Tasmanian waters during spring and summer but here they were swirling about me as I wrestled with my torch to fix a beam of light on them.

I had come prepared with not only torch but with a red cellophane covering so that the penguins would not be disturbed by the light as they came ashore.

The red glow, meantime, shone an eerie light on the shearwaters swooping and rising about me. The light also served to exaggerate their size, but then again close up they are remarkably large birds, with a wingspan measuring about a metre.

Finally I managed to fixed a light on a single bird that was squawking and fluttering, coming into land at high speed and then rising at the last moment, as though unsure where its den lay in the dunes and beach-side vegetation.

Each year after the nesting season in south-eastern  Australia the shearwaters take off on a perilous journey to the far northern Pacific, spending the boreal summer fishing off the coasts of Alaska, Russia and Japan.

Their migratory journey is difficult to plot because the shearwaters do not come ashore during the months of the migration. Exhausted and starved birds are often washed up on beaches of Japan, the AleutionIslands spanning Alaska andRussia and the eastearn coast of Australia.

Originally these strandings led scientists to believe that the birds flew a figure of eight course across the Pacific Ocean. Recent studies suggest the majority of birds merely fly north along the western part of the Pacific Ocean to the Arctic region and return southwards through the centre of the ocean. Either way  the birds travel about 15 000 kilometres in each direction annually. They have been known to fly this remarkable distance in six weeks.

The shearwater is the most abundant Australian seabird. Approximately 23 million short-tailed shearwaters breed in about 285 colonies in south-eastern Australia from September to April. Eighteen million of these arrive in Tasmania each year.

Shearwater parents rear only one chick in their sand dune burrows, before abandoning their fully-fledged young to make their own journey north.

My shearwater experience was not to end at The Neck that evening. Next day at Adventure Bay an excited crowd of birdwatchers attending the Bruny Island Bird Festival were focusing their binoculars out to sea where a massive flock of muttonbirds had gathered.

Seabird experts among them estimated that the flock contained at least 15,000 individuals. The sea was black with birds about half a kilometre off-shore and the ocean bubbled underneath the sheer weight of them.

The name “muttonbird” was first used by the early settlers on Norfolk Island, who each year harvested adult providence petrels (Pterodroma solandri) for food. The petrels were similar to the short-tailed shearwater and were dubbed “flying sheep” by sailors.

The providence petrel is extinct because of over-hunting but Tasmanians are lucky that strict curbs have now been placed on muttonbirding in the state so that the future of the short-tailed shearwater looks assured.

Silent and brooding, the Shy Mountain does not have to speak her name. We know she’s there, watching … END_OF_DOCUMENT_TOKEN_TO_BE_REPLACED

Although written more than 30 years ago, The Falconer of Central Park has remained popular ever … END_OF_DOCUMENT_TOKEN_TO_BE_REPLACED

Tasmania might be known internationally as the home of the Hollywood cartoon character, Taz, based … END_OF_DOCUMENT_TOKEN_TO_BE_REPLACED