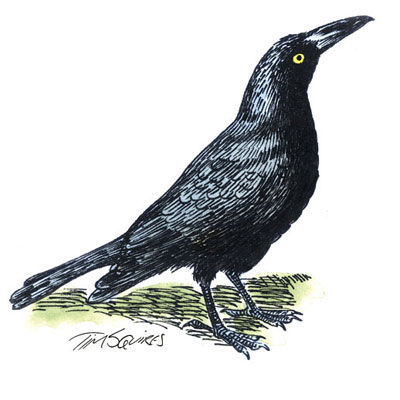 The Tasmanian currawong was a sight to behold. Jet-black matt plumage, ebony bill,  mad orange eye and flashes of brilliant white at the tips of the wings and tail.

It fluttered about the  Waterworks Reserve, at times seemingly coming within touching distance.

The lone bird had been a godsend on a quiet day without birds. I had been leading a  bird walk and  had struggled to point out any birds of interest.  The satin flycatcher I had staked out previously failed to show (I could have sworn it had a nest nearby) and the calling golden whistlers and grey shrike-thrushes kept their distance.

The small party of novice birders had been treated early on to a flight of dusky woodswallows, and then black-headed honeyeaters chasing off pallid cuckoos. The cuckoos were no doubt scouting for nests in which to lay their eggs.

But after watching the  cuckoos,  resembling falcons with long-winged, fast flight through the treetops, the birds had dried up. So the currawong, near the end of the walk, had arrived just in the nick of time.

All eyes settled on it. The bird walk had been organised for the Waterworks Valley Bushcare Group under the auspices of the Hobart City Council and the council had provided binoculars for the participants.

Although found on Mt Wellington, the Tasmanian currawong is an infrequent visitor to the lower elevations of the Waterworks Valley, unlike its cousin, the grey currawong.
The other birders and I had compared the two species, noting difference in beak size and eye colour and the fact the grey currawong had  a different call, “a clink, clinck” sound that gives it its another name,  clinking currawong.

And then the Tasmanian currawong settled, so we could view it close up. We were in for a shock, however.  The hand of nature – as we had seen with woodswallows chasing off cuckoos intent on making them surrogate parents – can be a cruel and unforgiving one. The currawong had seen movement  in a prickly moses bush and  plunged into the foliage, to emerge with something in its beak.

We trained our binoculars on it and saw it was an adult black-headed honeyeater, presumably plucked from its nest. A silence descended on the party. And then there was a debate about nature and its mantra of survival of the fittest, of currawong and other predators only doing what they are born to  do.

And we reasoned, weren’t black-headed honeyeaters predators in their own way, preying on grubs and insects that they prise from the bark of wattles and eucalypts, when they are not brushing their feathered tongues with pollen and nectar? Mercifully, the honeyeater had a quick and painless death. After being hauled from the nest it was speared with that ferocious beak.

It had proven an unfortunate week for honeyeaters. When I returned home an email with a picture attached to it was waiting for me. A reader had photographed a black-headed honeyeater feeding a pallid cuckoo chick, a “baby” double its size!

Silent and brooding, the Shy Mountain does not have to speak her name. We know she’s there, watching … END_OF_DOCUMENT_TOKEN_TO_BE_REPLACED

Although written more than 30 years ago, The Falconer of Central Park has remained popular ever … END_OF_DOCUMENT_TOKEN_TO_BE_REPLACED

Tasmania might be known internationally as the home of the Hollywood cartoon character, Taz, based … END_OF_DOCUMENT_TOKEN_TO_BE_REPLACED