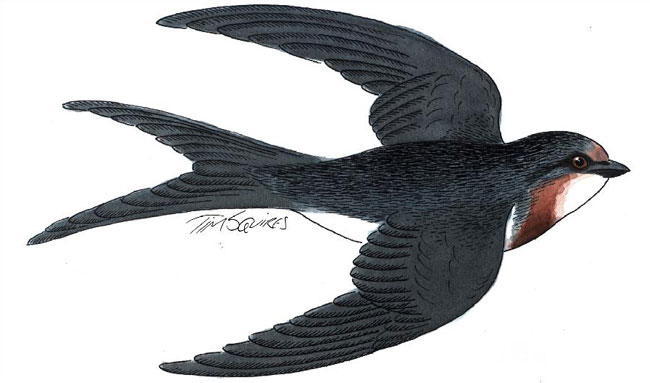 A reader phoned at the height of the bushfires this summer to report that hundreds, possibly thousands, of welcome swallows had gathered at a single location in the HuonValley and he was puzzled why they were congregating in this way.

It was too early for the start of the migration when both welcome swallows and their near relatives tree martins can be seen perching on telegraph lines, marking time before heading north to cross Bass Strait.

When the reader called, smoke was still covering virtually the entire Tasman Peninsular and I could only speculate that the swallows had been displaced from this vast area and had flown to a region in the south of the state clear of smoke, and clear of danger.

Birds have a great advantage, of course, when bushfires strike because they are mobile and can fly long distances to avoid the flames. Some species like magpies, butcherbirds and forest ravens are even attracted by fire, seizing the opportunity from a safe distance to catch skinks, snakes and larger insects fleeing the flames.

The birds are safe as long as they keep well ahead of the approaching flames, keeping low to avoid flying embers.

I must say I saw larger numbers of summer migrants during the bushfire emergency earlier this year. Both black-faced cuckoo shrikes – known as summerbirds in Tasmania– and dusky woodswallows turned up in places close to the centre of Hobart where I do not usually see them. There were also large numbers of sulphur-crested cockatoos about towards the end of the summer, far more than are usually seen in this period.

The cockies we see in Hobart during the winter months and early spring tend to head to the Hobart suburbs from the DerwentValley after the farming season has ended and crops that provide food have been cleared. But my mail and email was full of reports from people seeing large numbers of cockies causing mayhem in the suburbs earlier than usual.

One reader in SandyBay said she was tired of their squawking all day and joked that she wished she owned a shotgun.

As it happens a party of squawking cockatoos passing over my home gave me a fabulous bird sighting. Because they have been so common I have hardly been giving the cockies a second glance, but the urgency, and power, of their calls caused me to glance upwards.

Among the cockies was a sleek male hobby that had somehow found himself in the middle of a cockie flock.  By the look of the swerving, agitated hobby (or little falcon as they are also known) I don’t know who had got the greater shock, the falcon or the panicking cockies.

Talking of birds and bushfires, it is worth noting that our feathered friends are not the only creatures of the wild to be affected at times of extreme fire incidents.

Birds  are not only fortunate in being able to fly from the flames but the fires tend to come at the end of the breeding season when young are on the wing and can join their parents on journeys away from the flames.

For mammals, reptiles and amphibians it is a different matter. We have all seen horrific pictures of the larger mammals like wallabies and wombats burned  by the flames, many recovering at rescue centres.

A plan is afoot to alleviate the stress of such animals by proving rescuers and carers with a special medical trailer that can be dispatched to fire incidents.

I’ve seen a blueprint of the proposed trailer and it has everything an injured animal could require, with its own power supply and a pullout treatment table so first aid can be administered urgently.

The campaign for the emergency trailer is being promoted by Southern Wildlife Rescue and Care and details of the vehicle can be viewed at its website, www.southernwildlife.org

Silent and brooding, the Shy Mountain does not have to speak her name. We know she’s there, watching … END_OF_DOCUMENT_TOKEN_TO_BE_REPLACED

Although written more than 30 years ago, The Falconer of Central Park has remained popular ever … END_OF_DOCUMENT_TOKEN_TO_BE_REPLACED

Tasmania might be known internationally as the home of the Hollywood cartoon character, Taz, based … END_OF_DOCUMENT_TOKEN_TO_BE_REPLACED