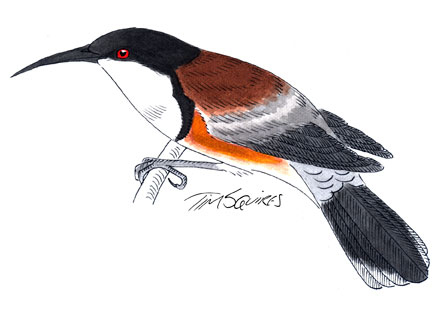 THE battle for the banksias and bottlebrushes takes place every autumn as soon as temperatures start to drop, and the smoke from wood stoves spills from household chimneys.

The chill winds blowing off the high country carry with them the calls of the spinebills and crescent honeyeaters, the birds making their way down from breeding grounds to warmer areas closer to the coast. In the process, however, they clash with resident species like new holland honeyeaters, incensed by this intrusion on territories where they have jealously guarded flowering food sources all year.

We might think that bird migration involves species that cross Bass Strait on their way to the mainland when winter starts to grip  Tasmania, but there is also movement within the state, largely involving a handful of species escaping  the mountains before the peaks are coated with snow and food becomes difficult to find.

The message that winter is on its way is usually sounded by the “egypt” call of the crescent honeyeaters, a metallic sound that is piercing and far-reaching. Another distinctive call comes from the eastern spinebill, with its sharp staccato whistle.

The smallest members of the honeyeater family inTasmania, crescent honeyeaters and eastern spinebills are largely nectar-feeders and are common in wet forests and at high altitudes in summer. In autumn, they extend their ranges into dry sclerophyll forests and coastal scrub to feed on the nectar of common heath, native cranberry, spreading pinkberry, common correa and silver banksia.

With these plants and some exotic species in suburban gardens they are able gather sufficient nectar to meet their energy requirements from plants with smaller flowers, that the larger honeyeaters find more difficult to exploit.

All the same, the bigger new holland honeyeaters and little wattlebirds still chase them mercilessly, and the crescents and spinebills have to use all their aerial skills and cunning to steal nectar and pollen from, if not under the noses, under the beaks, of their bigger foe.

In turn the spinebills and crescents war with each other to snatch as much food as they can.

The spinebill  has evolved to be the “pickpocket” of nature, darting on long slender wings to snatch beakfuls of food before  the bigger honeyeaters know they are about. To aid this  process, and to help them exploit the smallest of flowers like the bell-like, pink blooms of common heath they have a long, narrow, scimitar bill  from which they derive their name.

Spinebills are one of the most attractive members of the honeyeater clan. Their plumage manifests a mixture of black, white and reddish-brown, with a flash of white in outer tail feathers in flight being a distinctive feature.

Because they carry bright yellow in the wings, crescent honeyeaters can easily be confused with the slightly bigger new holland honeyeater but with careful and patient study it soon becomes apparent crescent honeyeaters are largely grey, with a dark crescent-shaped band on both sides of the chest. The golden yellow feathers on the wings and in the tail is often only seen when the birds are in flight.

Along with the honeyeaters another species invading suburban gardens in autumn and winter is the scarlet robin. The beautiful robin does not display the same level of belligerence, finding little competition in its hunt for insects on open ground, instead of in the flower heads.

And its sweet, thin song is without aggression and menace; the melody soothing the tension of the avian war zone.

Silent and brooding, the Shy Mountain does not have to speak her name. We know she’s there, watching … END_OF_DOCUMENT_TOKEN_TO_BE_REPLACED

Although written more than 30 years ago, The Falconer of Central Park has remained popular ever … END_OF_DOCUMENT_TOKEN_TO_BE_REPLACED

Tasmania might be known internationally as the home of the Hollywood cartoon character, Taz, based … END_OF_DOCUMENT_TOKEN_TO_BE_REPLACED