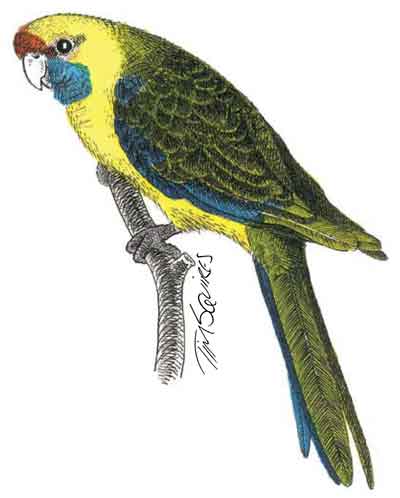 BIRDS are the great escape from the strains and pressures of daily life, or at least they have been for me my entire life.

So when a close friend was feeling low and bereft I suggested we take a stroll into the world of birds to take his mind of things.

My friend had in recent days seen his only son leave for university study in England and was coming to grips with that feeling all loving parents eventually come to know, “empty nest syndrome”. Taking to the golf course had not helped – my friend often did a round or two with his son – and so I suggested a spot of birdwatching might be what he needed. The father and son had never been birdwatchers, so this was something new.

I chose the Domain for our walk, because I had on previous days seen four species of parrot there and parrots were always good to look at for novice birdwatcher; not only for their beautiful plumage, but their antics and friendliness towards humans which allow close study.

We were not disappointed. Parking in the car park at the Royal Tasmanian Botanical Gardens, we followed the Grassland Gully up the hill to the upper Domain, seeing at first green rosellas on the way and then a swift parrot. At the summit we joined the Soldiers’ Memorial Avenue, travelling its entire length one way and then the other until we ended at the Crossroads soccer grounds.

The Memorial Avenue, or Soldiers’ Walk as it is also known, is one of my favourite trails within the city boundaries. I recommend everyone who has not been there to try it, not just – in my case – for the birds but the Tasmanian history encompassed along it, from the Victorian pavilion at the cricket oval, to the historic gunpowder store  built of sandstone, to the walk itself, with 520 trees planted in 1918-19 to commemorate Tasmanian soldiers killed in the First World War, each tree with a plaque giving the soldiers’ names and the circumstance of their death.

Besides parrots on the walk, we were to see scarlet and dusky robins singing from low branches, fantails flitting through the dappled glades and the first welcome swallows of spring. And there was an added treat – a small party of firetail finches scurrying out of our way as we walked along the track.

All the time  musk lorikeets raced overhead, one alighting in a silver wattle so that my friend could see its shimmering, almost iridescent bright green plumage and the red mask on its face which makes the species easy to identify from the similar and less common swift parrot.

Eastern rosellas stole the show, as they always do up on the Domain. My friend was impressed, confessing that he had never studied them carefully and in the past had hardly given them a second glance. They were so tame that we could approach them to within a few metres, and I pointed out that they are extra special in Tasmania because the Tasmanian sub-species is actually larger than the one found on the mainland, and is of brighter colours.

When I first saw eastern rosellas, in the Bristol Zoo in Britain, I considered them the most beautiful bird I had ever seen – like giant budgerigars with added splashes of  crimson and white. And I still do.

During the two hours of our walk my friend did not once mention his son, and how he was missing him, and how the house seemed so quiet and empty with him not there.

He stood in silence as, during the walk, we paused to read the words on the plaques commemorating all those young men who had gone off to fight for King and Empire nearly 100 years ago, and never come back. Young men, some still teenagers, killed in trenches, in bi-planes, drowned in ships sunk off Gallipoli by German submarines. Carpenters, stokers, bank clerks, farm-hands, shearers, tram conductors.

When my friend finally uttered a few words, he said a walk on the Domain put his son’s absence for six months into a different perspective.

Silent and brooding, the Shy Mountain does not have to speak her name. We know she’s there, watching … END_OF_DOCUMENT_TOKEN_TO_BE_REPLACED

Although written more than 30 years ago, The Falconer of Central Park has remained popular ever … END_OF_DOCUMENT_TOKEN_TO_BE_REPLACED

Tasmania might be known internationally as the home of the Hollywood cartoon character, Taz, based … END_OF_DOCUMENT_TOKEN_TO_BE_REPLACED