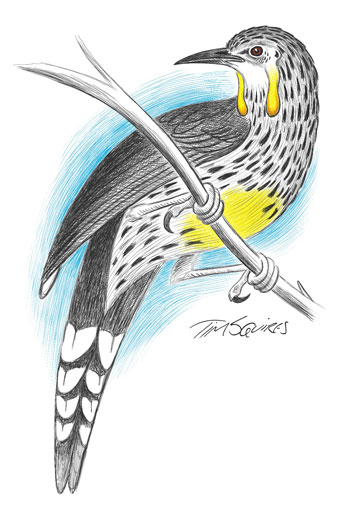 My friends joked  “Ah, bird flu” when I explained the reason I had been out of circulation for a week or so – a bad case of influenza.

I soon grew tired of the joke as, during my confinement, I had found a yellow wattlebird and its raucous song no laughing matter. When you are feeling poorly, with a throat that feels like sandpaper, the last thing you want is a yellow wattlebird to arrive in the garden, with its harsh, guttural “song”. In some country districts I’ve even heard wattlebirds described as the “coughing bird”.

Initially when I was first laid low, and a raging headache made reading or watching television impossible, the sweet refrain of scarlet robins in my garden and the chortle of yellow-throated honeyeaters brought some comfort. Then the wattlebird had to go and ruin it all. The bird in question had perched on the branch of an apple tree outside by bedroom window, fixing me with a cold stare. Then it threw back its head, as if talking a gulp of air and let loose with its “song”.

You can’t describe this as a song at all. It’s a rasping sound, like someone with a bad case of influenza attempting to clear their throat. One of my bird books describes it as “like someone retching”, but we won’t go there.

I shouldn’t be too harsh on the yellow wattlebirds, it is not their fault that they were at the end of the queue when the birdsongs were handed out.

The wattlebirds are in fact interesting and elegant birds the size of a rosella that have long yellow and red wattles travelling down the sides of their faces. They have an upright, haughty air and look like Victorian dowagers, with long earrings, on the way to a ball to checkout suitors for their young nieces.

Winter proves a tough time for the wattlebirds, and it’s got nothing to do with the bird flu that can stalk both humans and birds at this time of year.

As the biggest members of the 70-strong Australian honeyeater family, they need vast amounts of honey and nectar to sustain them, to power relatively heavy bodies in flight.

That’s why the wattlebirds always appear so noisy and aggressive. When they find a honeypot of winter-flowering grevilleas or other exotic plants they have to guard it, and drive off the other, smaller honeyeaters looking for a feed.

They don’t only rely on nectar, of course, and love native fruits when they are available. Their diet made them a favourite of the early settlers who shot them in big numbers and cooked them in pies. The honeyeaters were hunted to near extinction in Victorian times before being protected, although I suspect there are still many country people who might still enjoy the odd wattlebird pie.

During the week I was struck by flu I had planned to go to Melbourne to join mainland birders searching for over-wintering orange-bellied parrots along the Victorian coast.

You must be sanguine about such setbacks, and at least I was happy in the knowledge that the yellow wattlebird – despite its annoying song – is secure in its numbers and in my lifetime I will not have to go on a hunt to find possibly the last one surviving. There are only an estimated 55 orange-bellied parrots left in the wild.

Silent and brooding, the Shy Mountain does not have to speak her name. We know she’s there, watching … END_OF_DOCUMENT_TOKEN_TO_BE_REPLACED

Although written more than 30 years ago, The Falconer of Central Park has remained popular ever … END_OF_DOCUMENT_TOKEN_TO_BE_REPLACED

Tasmania might be known internationally as the home of the Hollywood cartoon character, Taz, based … END_OF_DOCUMENT_TOKEN_TO_BE_REPLACED