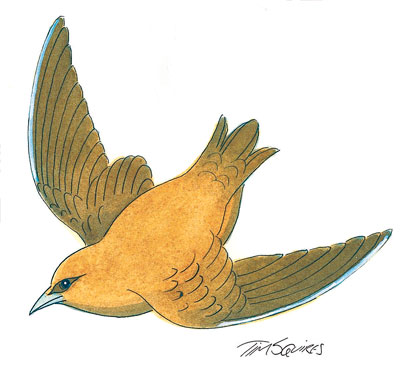 Winter had finally arrived, with a dusting of snow on Mount Wellington and a chilly wind rattling the eucalypt canopy but, observing the antics of the dusky woodswallows, you would not know it.

The welcome swallows and tree martins had been gone for weeks but here on a sunny if bitterly cold day the woodswallows were  still doing what  woodswallows do best – launching themselves from bare branches to snap up insects in mid-flight.

It was a surprise to come across them during the Easter long weekend in the Peter Murrell Reserve in Kingston. I didn’t need the weather report on television to inform me it was the coldest day since the previous October and my harbingers of autumn and winter, the crescent honeyeaters and eastern spinebills, were about in good numbers after coming down from higher ground in previous weeks.

Like the swallows and martins, the woodswallows are summer migrants to Tasmania and time their arrival from the mainland for when insects are in full flight in the spring and summer months.

They usually do not wait for the cold weather to bite in early autumn, and are on their way long before the first snows start to appear on Mt Wellington. This year the woodswallows had not read the script. However, studying them closely through my binoculars after each of their sorties, I could see that they were finding plenty of insects, some big juicy ones, to feed on but I wondered how long the insects would survive in such cold weather.

I hadn’t seen woodswallows for some time and surmised that these were the last of the migrants,  stragglers perhaps moving north from the far south of the state, well behind the main movement of migrant birds  heading towards the main obstacle on their trans-state route, Bass Strait.

The woodswallows in the Peter Murrell reserve seemed oblivious to the danger of being stranded in Tasmania without food. I watched them for a good hour, before the sun set, and they did not seem in a hurry to move on.

They certainly appeared to be leaving their departure a little late and I was concerned that they might not find adequate food supplies on the rest of their Tasmanian odyssey to fuel the onward push over Bass Strait and beyond. Perhaps, though, the woodswallows were gorging themselves on a plentiful supply of  food before one final  push to make the northern coast. I hoped so.

Woodswallows, despite their name, are not members of the Old World swallow and martin family but are a totally Australian species. As unlikely as it may seem they are closely related to the Australian magpies, butcherbirds and currawongs, and have merely evolved to hunt insects in the air, as opposed to on the ground like the other family members.

During the evolutionary process they have developed long swept-back wings, the same type of wing as the swallow, and similar mid-air behaviour although they tend to return more frequently to trees than the true swallows, that fly for longer periods, feeding and drinking on the wing as they swoop over lawns and other open spaces.

The woodswallows and swallows are easily told apart. The woodswallow, at about 18 centimetres, is considerably bigger and is less streamlined and more chunky in appearance. The tree martin, without a long tail, more closely resembles it, but is again smaller and has a white rump.

Woodswallows might appear sombre in colour at a distance but they are extremely beautiful birds. They mix smoky, red-brown feathers on the back with blue wings. The leading edge of the wing is white and they have white tips to their tail.

As I lit a log fire when I got home, my thoughts were with the woodswallows and I just hoped that they would not struggle to find food on the way to Bass Strait.

Silent and brooding, the Shy Mountain does not have to speak her name. We know she’s there, watching … END_OF_DOCUMENT_TOKEN_TO_BE_REPLACED

Although written more than 30 years ago, The Falconer of Central Park has remained popular ever … END_OF_DOCUMENT_TOKEN_TO_BE_REPLACED

Tasmania might be known internationally as the home of the Hollywood cartoon character, Taz, based … END_OF_DOCUMENT_TOKEN_TO_BE_REPLACED