EVERY year there’s the bird that got away, the species that eluded me in the summer months. Last year it was the satin flycatcher, this year another migrant, the shining bronze-cuckoo. Cuckoo songs are loud and far-carrying, as much a part of summer as the whirr of the garden strimmer and lawn-mower. We all hear them in the suburbs without knowing of the birds making these strange sounds. Two of the four cuckoo species visiting Tasmaniain summer, the fan-tailed and pallid … END_OF_DOCUMENT_TOKEN_TO_BE_REPLACED 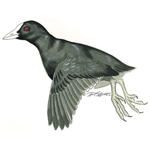 A COOT in need of friends, or even love,  was seen pottering around the Browns River at Kingston during the late summer, attracting attention from local residents worried about its lonely plight. The Eurasian coot usually goes about its business in sheltered watercourses unnoticed and I was touched when I received an email from a Kingston Beach couple telling me all about the visitor to the stretch of river near their home. The coot did not have a partner and  at times was … END_OF_DOCUMENT_TOKEN_TO_BE_REPLACED 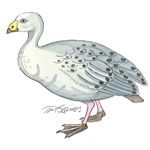 LIKE the seasons, a human life comes full circle. The seasons have a symmetry and I’ve found that life too often follows a pattern, events and experiences that had gone before are apt to return, even if in a slightly different form shaped by the passing years. On a rainy and windswept morning when commonsense should have found me at home I came across a lone Cape Barren goose at the Waterworks Reserve and immediately I was transported back to memories of my childhood and … END_OF_DOCUMENT_TOKEN_TO_BE_REPLACED 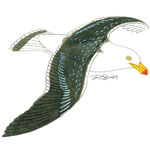 A RAINBOW spread across the ocean, framing storm-tossed waves and distant, grey mountains. As if on cue, to make the panorama complete, a lone gull zig-zagged across the wave tops, before rising slightly and flying smack bang though the rainbow’s arc. We stood in awe, a trio of men behaving badly, who had gone to the clifftop at Dodges Ferry not to watch birds but to freshen up after an afternoon of  what can be euphemistically termed as beer and wine tasting. We shouldn’t … END_OF_DOCUMENT_TOKEN_TO_BE_REPLACED

Silent and brooding, the Shy Mountain does not have to speak her name. We know she’s there, watching … END_OF_DOCUMENT_TOKEN_TO_BE_REPLACED

Although written more than 30 years ago, The Falconer of Central Park has remained popular ever … END_OF_DOCUMENT_TOKEN_TO_BE_REPLACED

Tasmania might be known internationally as the home of the Hollywood cartoon character, Taz, based … END_OF_DOCUMENT_TOKEN_TO_BE_REPLACED